Skip to Content Jump to Main Navigation Skip to Search

You Are Here: Influence of solid-liquid reactions in the soldering gap on solder properties and precision

The precision of a brazing process can be defined as the production of a brazed joint with defined reproducible mechanical properties through the use and variation of material and process parameters. Understanding and controlling the diffusion and solidification processes in the brazing gap is an absolute prerequisite for increasing the precision of brazing processes. In the case of brazing with, for example, Ni-based brazing alloys, the formation of undesirable intermetallic phases in the brazing alloy can occur if the geometry and process conditions are not ideal. These phases have a non-quantifiable influence on the brazing alloy and also on the mechanical properties of a brazed joint. The overall objective of this subproject is to analyze and understand the precision-determining factors of brazing and diffusion brazing processes and brazed joints, and finally to increase the precision in the brazing gap through improved process control and a new process control strategy. The model application addressed here, in overlap with the applications of other subprojects of SFB 1120, is toolmaking for die and injection molding processes.

In order to meet the overall objective of increasing the precision of brazing and diffusion brazing, the first phase involved an analysis and definition of the factors determining precision on the basis of brazed joints consisting of hot-work tool steel and the Ni brazing alloy Ni 620. In cooperation with subproject A06, aluminum materials brazed with SnCu brazing alloys were also analyzed. Supported by subprojects A06 and B07, the phase composition and formation, in particular of possible brittle phases, were investigated on various brazed joints. In addition, the thermal properties, such as the reflow temperature, but also the mechanical properties such as hardness and strength were characterized. In parallel, amorphous brazing foils were also produced and investigated using the melt-spinning process, Figure 1. The findings, and in particular the amorphous Ni-based brazing foils, represented an important component for the second phase.

The objective of the second phase was then to quantify the already defined and analyzed influencing factors and their correlations and, on this basis, to generate a higher-level understanding of the complex processes within brazing and diffusion brazing processes. Likewise, based on the acquired understanding, the goal was to develop new process control strategies for increasing the precision in the brazing gap. By using modified or Ti-inoculated amorphous brazing foils and a current-assisted diffusion brazing process (ECAB), a reduction of intermetallic phases and brittle phases in the brazing process of ΔV = 15 % was targeted, Figure 2. The aim was also to improve the mechanical properties in terms of hardness, plastic properties and the property gradients in the brazed joint. By inoculating with Ti, a decomposition and distribution of the brittle phases could be obtained, and by the ECAB process, a reduction of the brittle phases by more than ΔV = 50 % could be achieved. At the same time, the brazing temperature could be reduced by ΔT = 60 K to T = 1,000 °C even in very short brazing processes from t = 10 min, which protects the base material and increases the process efficiency. Overall, two fundamental new process control strategies or approaches for a significant increase in precision in the brazing gap were successfully found, Figure 3.

The aim of the planned third phase is to control the diffusion and solidification processes in the brazing process with the aid of the two new process control strategies from the second phase and thereby predictively increase the precision of the brazing processes and the brazed joints. In particular, the reproducible and defined decomposition and distribution of the intermetallic brittle phases in the brazing seam and the reduction of these brittle phases by at least ΔVSpröd. = 80 %, by controlling material and process parameters in the ECAB process. For better process control, the current density is to be increased without, however, increasing the Joule heating within the specimen. For this purpose, a controlled hybrid ECAB process is to be applied, in which the direct current is superimposed with current pulses of high amplitude. This results in further applicable control variables such as frequency, amplitude, pulse shape, etc., which enable an increase of the precision by the ECAB with a controllable Joule heating. In addition to the hybrid ECAB process, further research is also being conducted on inoculated amorphous Ni brazing foils. In particular, the focus here is on the use of refractory metals with lower affinity to B and C than Ti, but higher affinity than Cr. Similar to Ti-stabilized steels, the formation of smaller precipitates is expected here, which can further favor the solidification kinetics of the brazing material, e.g. due to heterogeneous nucleation. 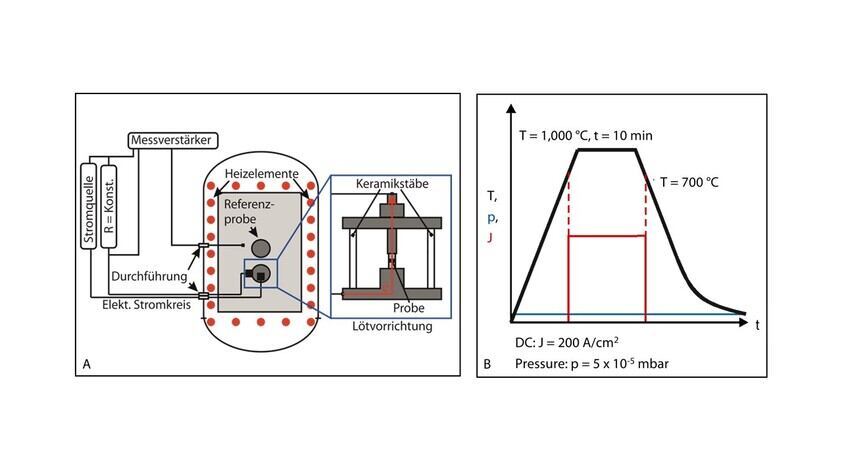 Copyright: © SFB 1120 Figure 2: Test setup in the vacuum furnace for the ECAB process (A) and process sequence (B).

Copyright: © SFB 1120 Figure 3: SEM images of brazed joints consisting of X38CrMoV5-1 brazed with and without application of the ECAB process and of Ti inoculated amorphous Ni 620 brazing foils.

The content embedded in this web page will take you to web pages provided by the Google-operated video sharing platform YouTube – YouTube, LLC, 901 Cherry Ave., San Bruno, CA 94066, USA. Invoking this content makes it possible for YouTube to determine your IP address, the language setting of your system, and a number of browser-specific details.

YouTube uses cookies and tracking tools. Information on YouTube's data processing activities and the purpose of these activities is available and can be viewed at YouTube.

By clicking the "accept" button, you agree to use the content provided by the platform under the conditions outlined above.

Please note that you give your consent for a one-time use of the web page only. When you visit the page again, you will again be asked for your consent.

The content embedded in this web page will take you to web pages provided by the Vimeo – Vimeo LLC, 555 West 18th Street, New York, New York 10011. Invoking this content makes it possible for Vimeo to determine your IP address, the language setting of your system, and a number of browser-specific details.

Vimeo uses cookies and tracking tools. Information on YouTube's data processing activities and the purpose of these activities is available and can be viewed at Vimeo.

By clicking the "accept" button, you agree to use the content provided by the platform under the conditions outlined above.

Please note that you give your consent for a one-time use of the web page only. When you visit the page again, you will again be asked for your consent.